What makes a good friend?

Read this story from Mrs Howie:

Ali, Harriet and Camila have been friends since before they started school. They play together at playtime, have lunch together and go to each other’s houses after school. Whenever their teacher Miss Jeremy puts them into groups they try to work together.

They also sit next to each other whenever they can. Esther has just started the school where Ali, Harriet and Camila go. Esther had lots of friends at her last school but is slightly worried about joining a new school. When Esther arrives at school she meets Miss Jeremy who seems really nice. Miss Jeremy asks her some questions about what she likes to do and says she thinks there will be children she will be friends with in the class.

At the beginning of the day Miss Jeremy introduces Esther to the class and asks Harriet to look after her and make sure she knows where everything is. Miss Jeremy says she has chosen Harriet because she thinks she and Esther have lots in common. Harriet is happy to do this as she thinks Esther looks nice and she trusts Miss Jeremy.

At playtime Harriet takes Esther out onto the playground with her and Ali and Camilla. They happily play a game for a while. After playtime they have maths and they all work together. For a few days all four of them get on really well. Then on Friday they have a spelling text and Esther gets everything right. Ali doesn’t like this as she is usually the only person in the class who gets full marks in spelling.

Over the weekend Ali, Harriet and Camilla are playing together when Ali starts to complain about Esther and to say unkind things. Camilla agrees with her but Harriet isn’t so sure. She tries to stand up for her new friend so the others agree to give Esther another chance.

On Monday Esther arrives at school and comes over to Ali, Harriet and Camilla. Harriet is chatting to her but Ali and Camilla don’t say very much. During lessons they try to avoid working with Esther. They all sit together for lunch but then afterwards Ali and Camilla go off to play and Harriet can’t decide who to go with. She feels sorry for Esther so stays with her for that lunchtime. After lunch Ali and Camilla ask Harriet about this and start to point out some of the things they don’t like about Esther.

Over the next few days Ali and Camila spend less time with Esther. Harriet decides she doesn’t want to lose her friends so she suggests Esther makes friends with some other children.

Use these friendship cards to help:

Which of these things show friendly behaviour and which do not?

Think about the story again.

If you were Harriet what would you do next? Who could you ask if you needed some help?

You could draw and add speech bubbles to write what you think should happen next.

What makes a good friend?

Can we follow a recipe using some of these words to make a really good friend ? 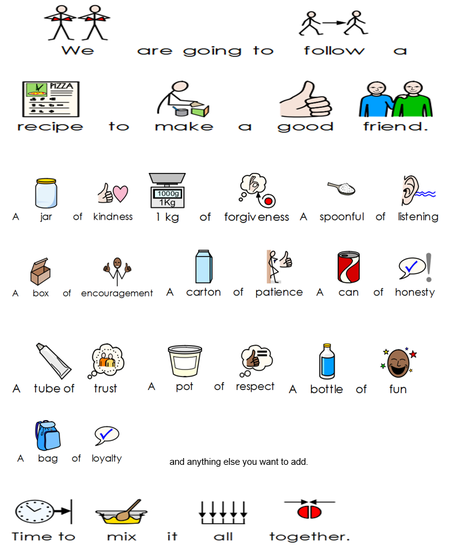 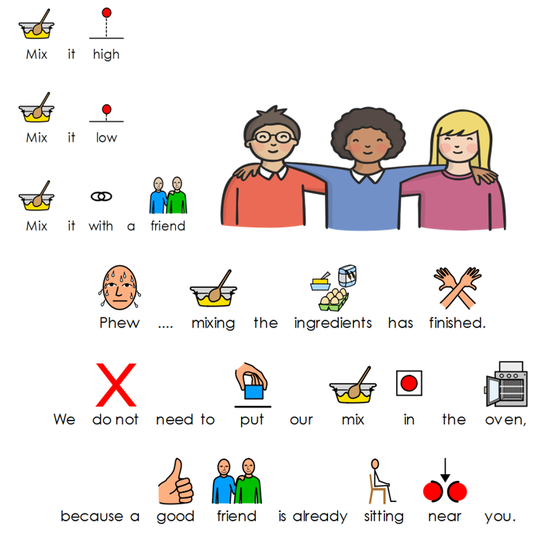 Have some fun writing the recipe again.

You can change the amounts and the things you are adding to suit yourself.

Remember, friends are always there and will be ready to play once we are altogether again.

So whether you are in school or at home have fun on RSE day on the 25th June.

Stay safe and see you all soon.