We are working as a team of dieticians. We are based in Edinburgh.

This women's rugby team have asked for our help as they are bored of their mid-game snacks of oranges. Are there any other fruit that would be good? Also, is there any truth in the rumour that some fruit are bad for your muscles?

The team taste tested lots of different fruit to decide which would be the tastiest for the rugby players. We also researched whether or not fruit is bad for your muscles and learned that the opposite is true: fruit contains lots of vitamins and minerals which are important for good muscle health.

The rugby players are pleased with our new fruit suggestions, though they are a bit annoyed with the men's rugby team who said men are stronger than women. Is this true? We had better test our muscles to find out!

The new care home in Merryfields would like our support in developing a healthy menu for the residents. Some of the residents are vegetarian or vegan, so we will need to think about this.

They think it would be lovely if the residents were able to grow some of their own food. Is this something we can factor into our menus? We'd better try growing some vegetables to see if this will be possible and have some ready for the care home opening at the end of July.

One of the resident's family members thinks the paleo diet would be a good way for their relative to stay healthy. What do we think about that? The paleo diet means eating what prehistory people ate, so we'd better find out about life in the Stone Age, Bronze Age and Iron Age to find out if this is something that would be good for us today!

A first school are teaching their pupils about healthy bodies and would like our support in developing some kind of interactive book or pictures to teach the children about muscles and skeletons.

Time to practise making flaps, sliders and other moving parts to make our work interactive!

This term we are working as a team of archaeologists. We are based in London. 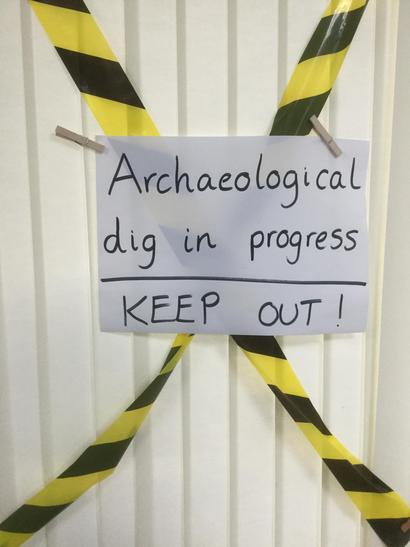 We arrived in class one day to find this. What is an archaeological dig? What do archaeologists do? 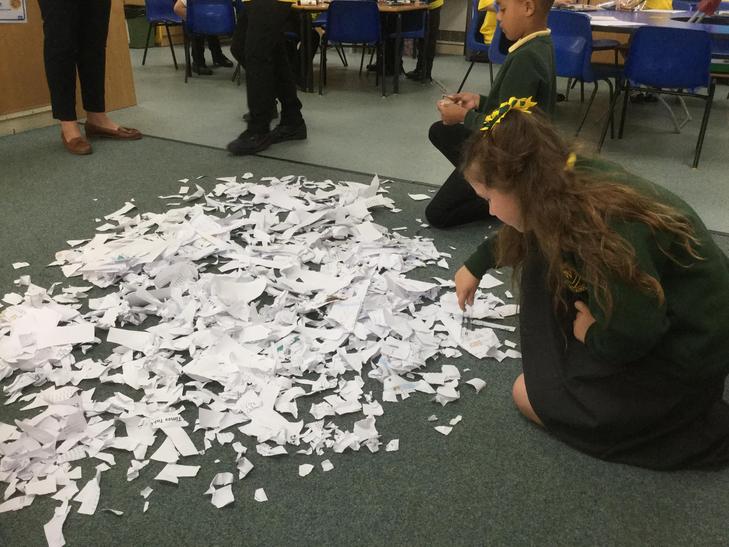 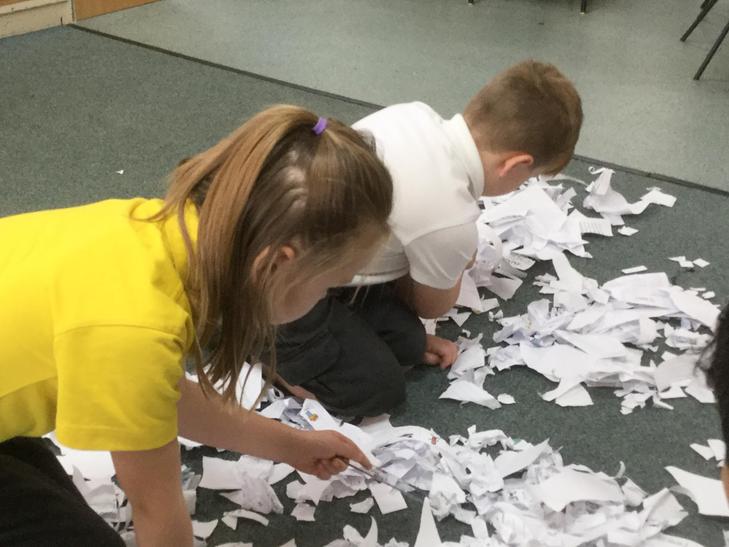 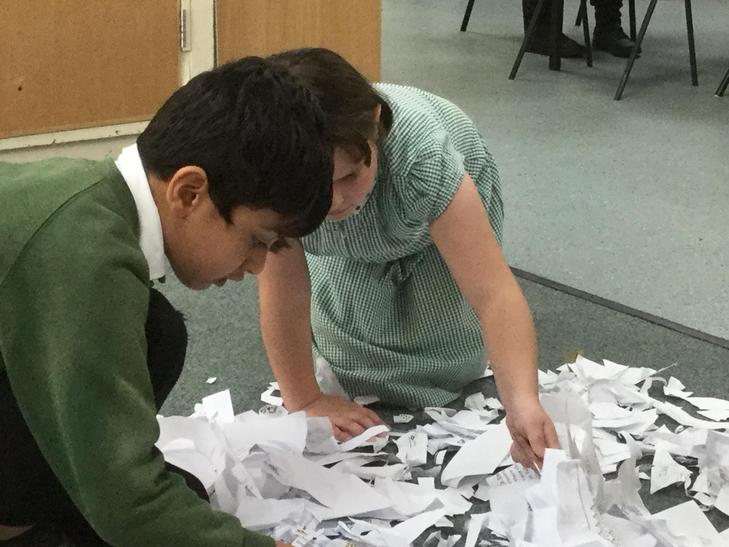 Archaeologists are scientists who dig carefully in the ground to find historical artefacts. 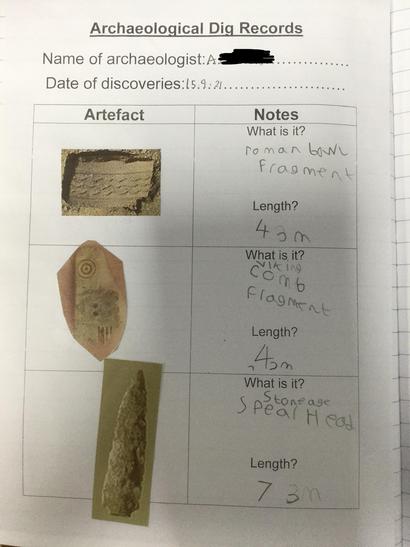 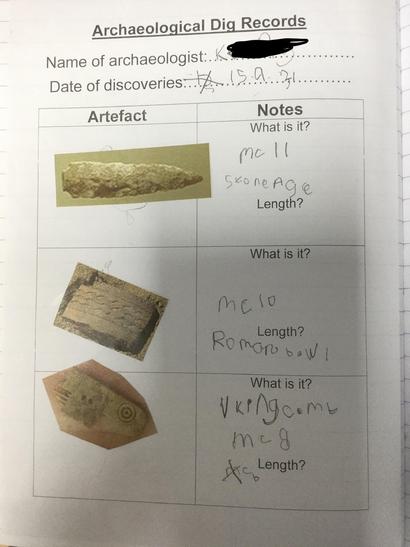 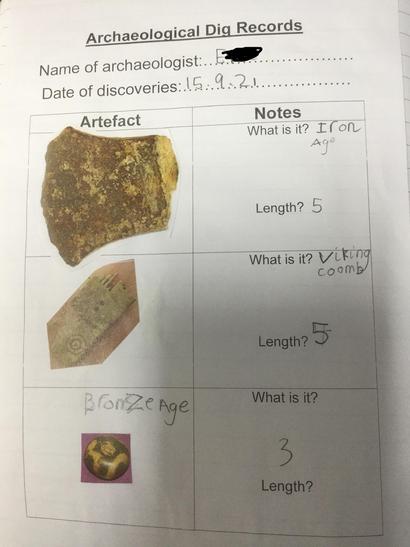 We found some fascinating artefacts, and recorded them carefully. 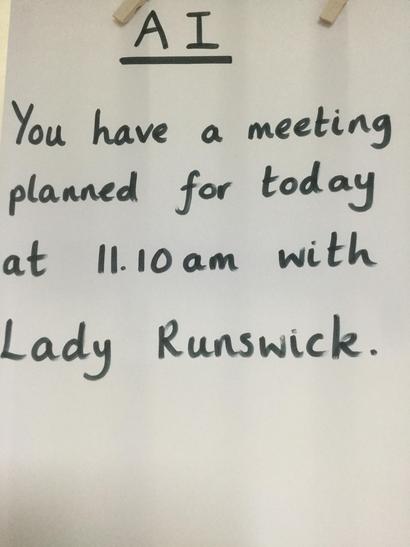 HQ informed us we had a meeting where we met Lady Runswick, our client. She wanted us to excavate a field on her land in Yorkshire. She wants to make the most of the boom in staycations by converting the field into a camp site, but the locals say there was an Anglo-Saxon settlement there a long time ago. We would need to excavate the area to find out. 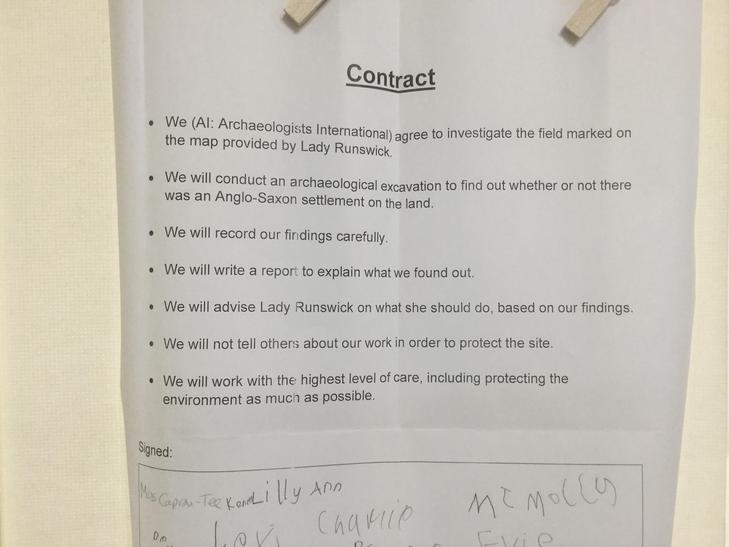 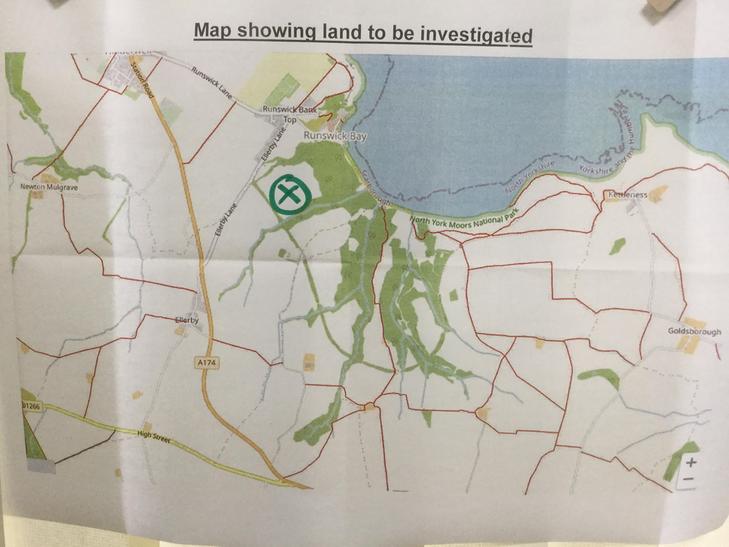 So we signed the contract and found out where we would be working. 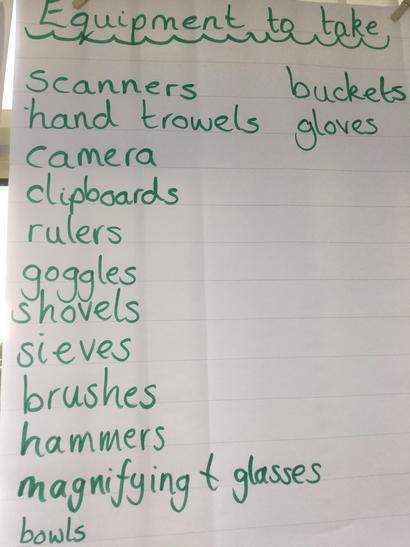 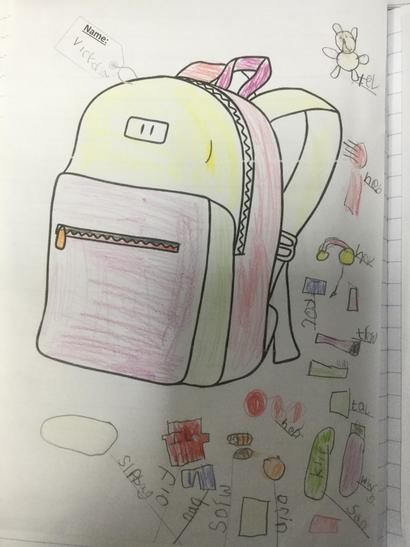 We planned what equipment we would need to take, and packed our bags - we would be camping near to the site. 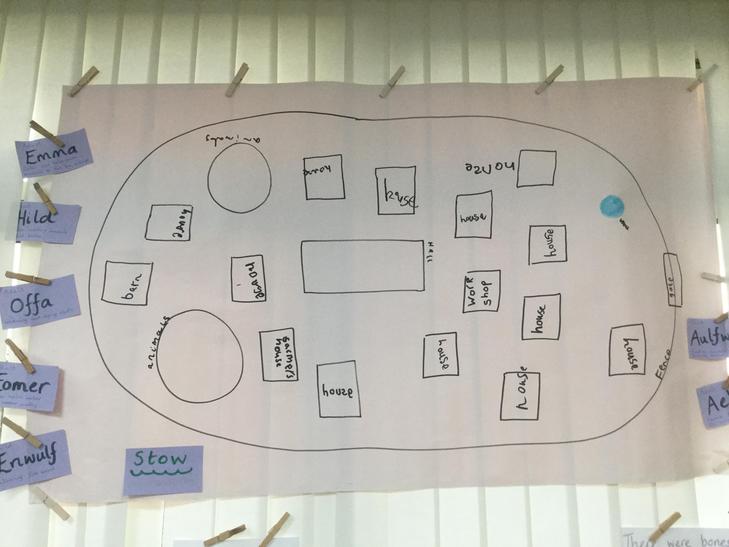 We set to work straight away, and made a plan of the Anglo-Saxon village, using the clues from the land. 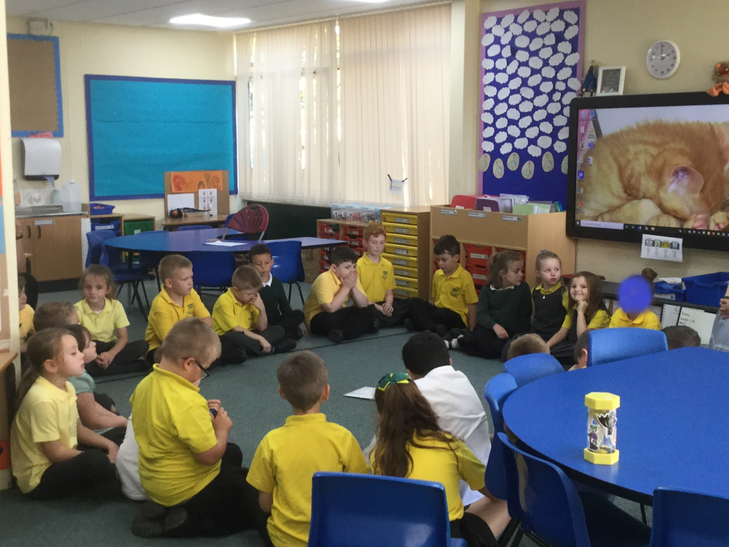 What would life be like in the Anglo-Saxon village? Drama was helpful to find this out. After a busy day which involved hunting, foraging, weaving, making things from metal, collecting firewood, cooking, mending clothes and lots of other things, the village gathered together around a fire to listen to a great story: Beowulf!

We re-wrote Beowulf in our Literacy lessons. 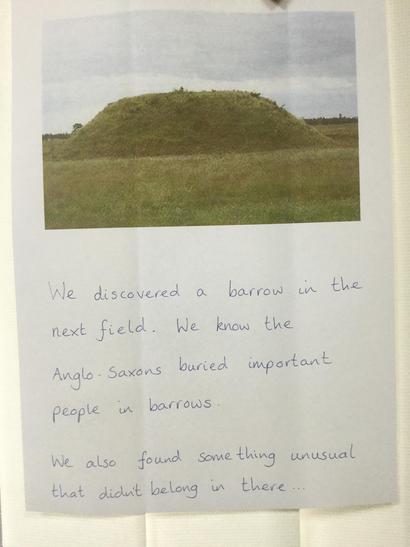 What would it have been like when the Anglo-Saxons followed their chief in a burial procession to place the remains of an important person in the barrow? We used drama to explore this. 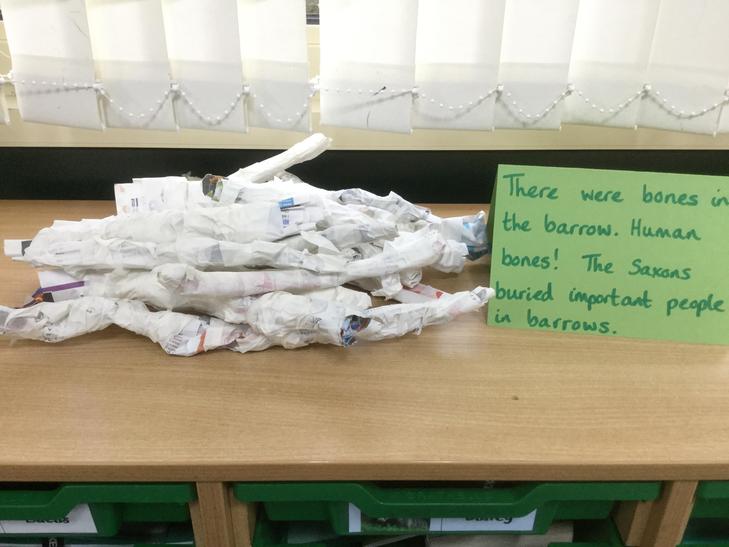 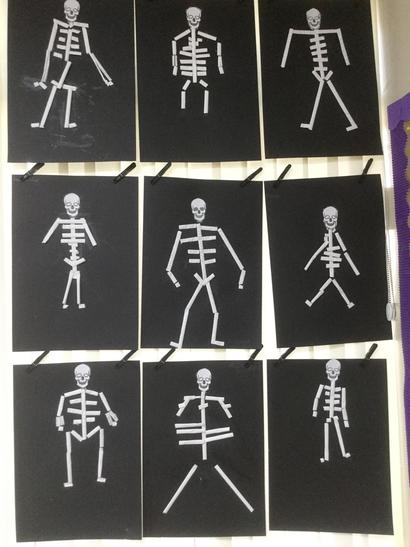 We tried to assemble the bones found in the barrow, but it was a lot harder than we thought! 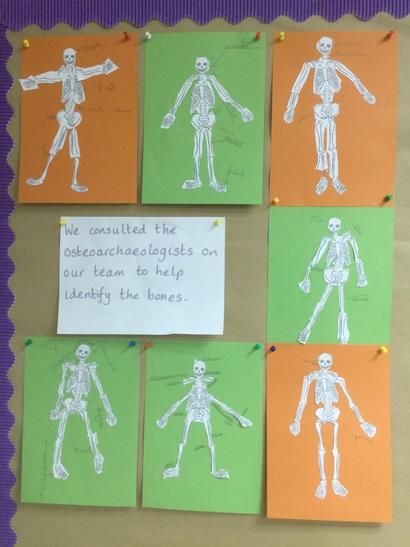 We had to ask an osteoarchaeologist to help! They specialise in bones. 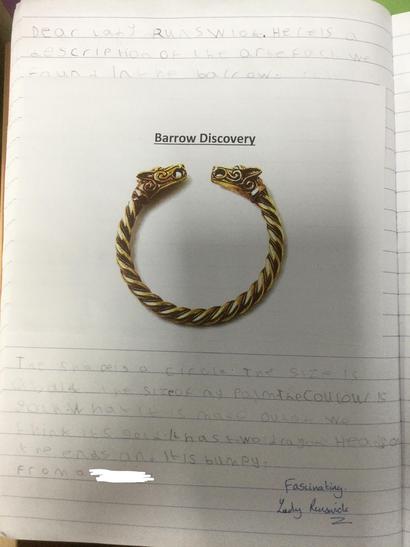 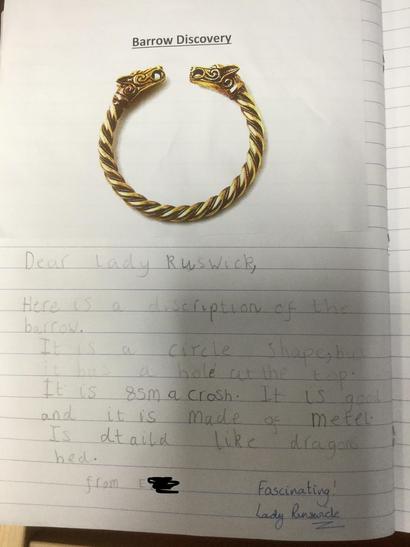 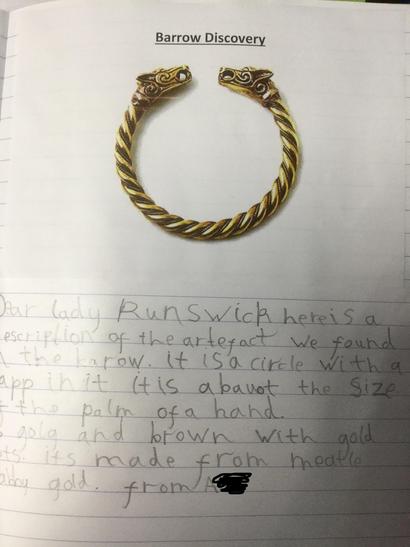 There was something unexpected in the barrow: this did not come from the Anglo-Saxons!

What was it doing in their barrow? We immediately wrote to Lady Runswick to let her know.

We think this may be a Viking artefact! 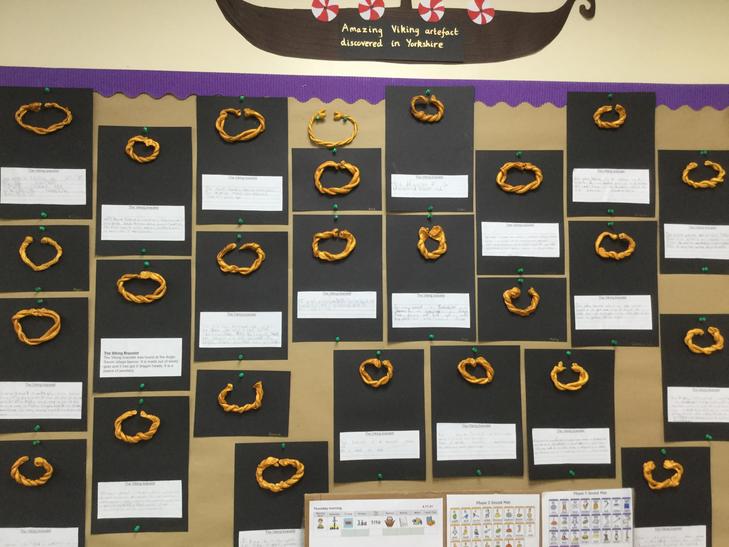 The Jorvik Viking Centre in York (which we found out is one of the most popular tourist attractions in the whole country!) asked permission to display the gold bracelet we found because we were right: it IS a Viking artefact! What was it doing in an Anglo-Saxon barrow, though? 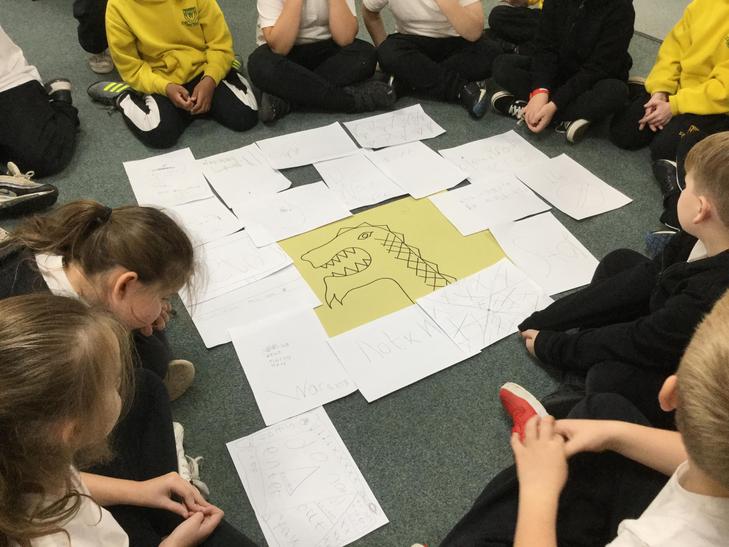 We continued our excavating, and discovered something VERY unusual: a wooden dragon head.

The sun was going down, we couldn't continue digging that day, but we knew we had to keep this discovery safe, so we put up signs to make sure people would keep out until we could return the next day. 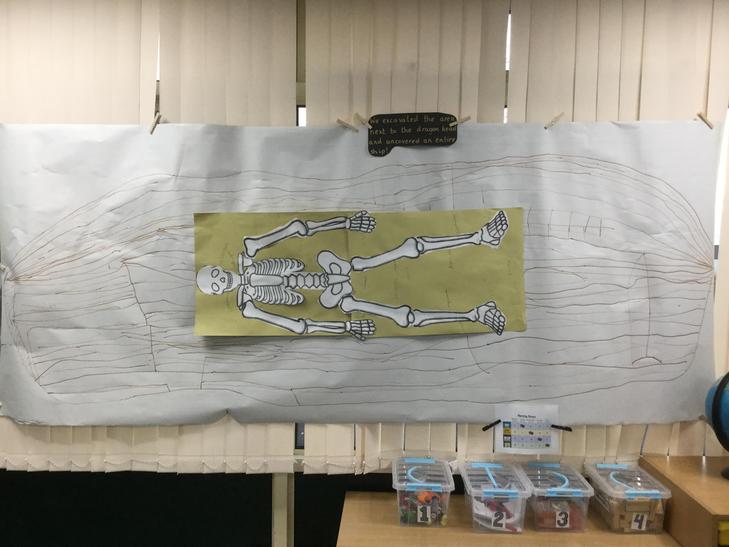 When we continued digging, we discovered something incredible - A VIKING LONGSHIP!

And inside it? A skeleton and lots of artefacts. At least we knew how to assemble the skeleton correctly now!

Clearly Vikings had also been in this area. We need to investigate to try and find out more about this.