2020 sees us working as Visit Britain on a campaign “The Year of Great British Women 2020”. The government have given us funding to encourage tourists to visit places outside of London. The campaign aims to encourage visitors to tour some cities and towns linked to a range of famous British women.

However, a farmer has discovered the remains of three females on his farmland in Birdlip. Archaeologists have confirmed that it is indeed Boudicca and her daughters. It was not known where she went after the final battle with, and defeat by, the Romans. This is an amazing discovery.

The government want her to be included in Visit Britain’s campaign. However this means that a decision will need to be made on whether to create an attraction around her burial place in Birdlip; to move the discoveries to Norwich where she was from; or to split up the artefacts.

To make an informed decision, we are finding out a lot about the Roman invasion of Britain and the revolt led by Boudicca. As Visit Britain, this will help us to decide and make sure we have historically correct information on her for the campaign. There is a real urgency as we need to campaign to be up and running soon.

We read a report on coins found with the skeletons in Birdlip. It suggested that the celtic tribe who would have been in the Birdlip area could have had connections with Boudicca.

In role as Iceni and Dubunni, we created drama to show how they might have negotiated a safe hiding place for Boudicca after the final battle with the Romans. In our story, the Dubunni accepted coins, weapons and jewellery in exchange for refuge for the Iceni. However, they did not want trouble form the Romans.

What happened to Boudicca? Why did she end up here?

We know that in “real life” no one really knows what happened to Boudicca. We used the versions written by two real Romans (Tacitus and Cassius Dio) and chose which one interested us the most. We created drama to show what these historians might have seen and written about.

We followed the poison idea and used this to create the moments told by celtic storytellers.

We have started to learn how to draw people with the correct proportions for their bodies so that we can create drawings which the Romans or Celts may have made. We may also want to make drawings for the campaign.

We are also using the work of Kate Pankhurst as inspiration for creating pages about the women in our Visit Britain campaign. She has a page in her “Fantastically Great Women Who...” books about Mary Anning. We are creating a page for Grace Darling and perhaps we will need to do Boudicca too...

Using paintings and information which in our story is in the museum in Norwich, we have been learning about when the Romans invaded Britain and why Boudicca decided to fight them. At first, we were totally on the side of the Iceni. However, we are now finding out about how or why a man became a Roman soldier and the legacies the Romans left with us. Perhaps the Romans were not as bad as we thought...

We will need to ensue any information included in the Boudicca part of our Visit Britain campaign is unbiased.

Boudicca’s escape from the final battle with the Romans

We thought about how Celtic storytellers might have recounted Boudicca’s final battle against the Romans. We thought that this information might be part of an exhibition about the Iceni queen and Visit Britain would need to think about how authentic it was for their campaign.

As huge fans of “Podkin One Ear” by Kieran Larwood, we compared Podkin’s escape from the Gorm to  Boudicca’s escape from the Romans. Using drama we represented the key moments for Podkin, Paz and Pook and compared these to Boudicca and her daughters.
As they were very similar, we used Kieran’s writing in chapter three to help us write about Boudicca (out of our story to put in to our story).

We are “orchardists” in Mantle - known throughout this Kingdom and beyond for our amazing apples. In Glorious Orchard, we are preparing for apple day although there are a few problems to sort out! We are also interested in using the land in Slumber Orchard to plant more trees. However, there seems to be a hidden story there...

Along the way, we are learning lots of science, art, PSHE and RE.

We visited a real orchard at Clive’s Fruit Farm

Classification of apples
Can we slow down the browning of apples?
Can a plant have too much water?
There are too many bruised apples
Now there are caterpillars in the apples
Our best workers
The queen’s advisors have seen arguments
Can we see through the fence of Slumber Orchard?
It has been derelict for many years
There was a clearing in Slumber Orchard
We pieced together inscriptions in a stone
Who could this be in memory of?
Why is she not spoken of?

Our Royal Warrant is in danger of being removed because of the problems we are having. Customers have spread bad reviews of our apples on Facebook and line graphs show that sales are down.

We have removed the nets from the trees and are starting to see the food chain return to normal - no more caterpillars in the apples.

We have agreed to make leaflet which shows why people should visit us.

We are also hoping to have a Diwali celebration which we will invite the public to. One of our workers has a shrine to Lakshmi in his locker as he is working such long hours, he hasn’t got a lot of time to worship at home and he must prepare for Diwali.

Whilst exploring Slumber orchard we have been investigating changes in the weather and whether plants can have too much water. Slumber Orchard is very overgrown.

We are exploring the idea of using Andy Warhol style printing for a new orchard logo.

We met with the managers to discuss having a Diwali celebration. They eventually agreed to it being in a clearing at the back of the orchard. It was a tremendous success.

We are still discussing whether we can have a worship room at the orchard...

At the end of the Diwali celebration, one of the Queen’s advisors handed us a note. Queen Alice demanded our presence at the palace the following day.

We were worried that she was angry at us for having a celebration.

We overheard her talking to one of her advisors. They told us about the legacy of Queen Esmeralda. The trees need to be taken care of and nurtured. “Fail to cherish, and the trees shall perish”. They handed us a book about the Mother Tree full of haiku poems (which we had written that morning).

The Mother Tree had started as a cutting from an awakened tree in slumber Orchard in 1949 - a century after Esmeralda had ordered that no apple seedling r sapling would grow. Glorious Orchard has grown around this tree &r 70 years with Queen Alice as its protector.

She ordered that the team focus their energies back on the trees.

One of the ceremonies 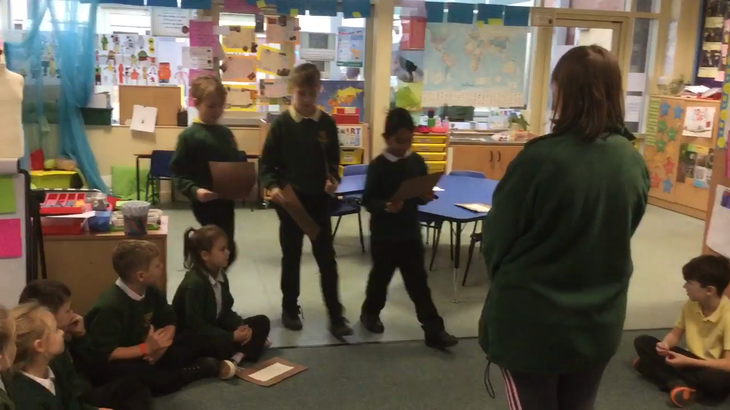 The advisors were at the orchard as the eyes and ears of the Queen. They reported back to her that most of the ceremonies were good. They did say that some needed improvement and the workers needed to know that this was not a “one time only” ceremony. QUeen Alice instructed them to write guidance for the team.
There was a run of awful weather in the Kingdom and parts of Glorious Orchard, in particular around the mother tree, were flooded. This led to lot of science out of the fiction - exploring the states of water, the water cycle and how temperature has an impact on evaporation. In the story, we worked on how to limit the flood damage, keep visitors safe and try to avoid further flooding.
Representing the mother tree
Sharing plans
Discussing
Explaining
Assessing the damage
Making the area safe
Taking action
Team work

We created the story of the Princess of the Realm and how the orchard had to come to be so overgrown. We wrote the story of our team and the discoveries in Slumber Orchard.
We came to understand that the Queen was not as evil as we first thought.

Finally, it was time for the Apple Day celebration. We created a new Entrance sign by printing in a style inspired by Andy Warhol. We decided that this would be a good way to end our Mantle and created newspaper reports showing a successful outcome!